It’s the worst kept secret in baseball (besides the scientific fact Mike Trout is from another planet): players, especially pitchers, are relying more and more on stem cell therapy to ward off injury.

The progressive stem cell therapies of today are being used by ball players from high-school prospects to major-league stars. Despite the fact everyone’s doing it, nobody talks about it, kind of like picking your nose.

So it was both anticlimactic and a revelation when the Los Angeles Angels announced that both Andrew Heaney and Garrett Richards would treat their torn ulnar collateral ligaments (UCLs) through stem cell treatments. It marked the first time ball players and their employers were open to divulging the rehabilitation plans utilizing this novel procedure.

Until now, the only solution to a torn or damaged UCL had been the infamous Tommy John surgery, a procedure that’s robbed fans of some of the game’s finest arms before they reached their potential. Some pitchers came back stronger than ever – Yu Darvish, Jacob deGrom, Chris Carpenter, Carlos Carrasco, and the late Jose Fernandez were still All-Star caliber after going under the knife. Others – Carl Crawford, Matt Harvey, Tim Hudson, Greg Holland, Josh Johnson – were never the same post-Tommy John.

Tommy John surgery has almost become like a rite of passage for today’s young flamethrowers. It’s no surprise, considering the continuous folding and unfolding of an arm firing baseballs at 95 miles per hour. The tissue on the inside of their elbows, which connects the upper and lower arms, breaks down, and tears.

A BRIEF HISTORY OF TJ SURGERY

The first successful TJ surgery was done in 1974 by orthopedic surgeon Frank Jobe on – surprise – Tommy John. The results couldn’t have been better: John’s career was given a second wind, allowing him to pitch another 14 seasons in the Show.

The procedure is simple in theory: the connective tissue that comprises the UCL is replaced with a tendon from another area of the patient’s body, or donated from a cadaver.

Even with John’s career resurrection, ‘Tommy John surgery’ was still rare; only a few players had a similar procedure through the mid-70’s & ’80’s.

The numbers continued upwards throughout the 90’s, but in the 2000’s, the numbers exploded. 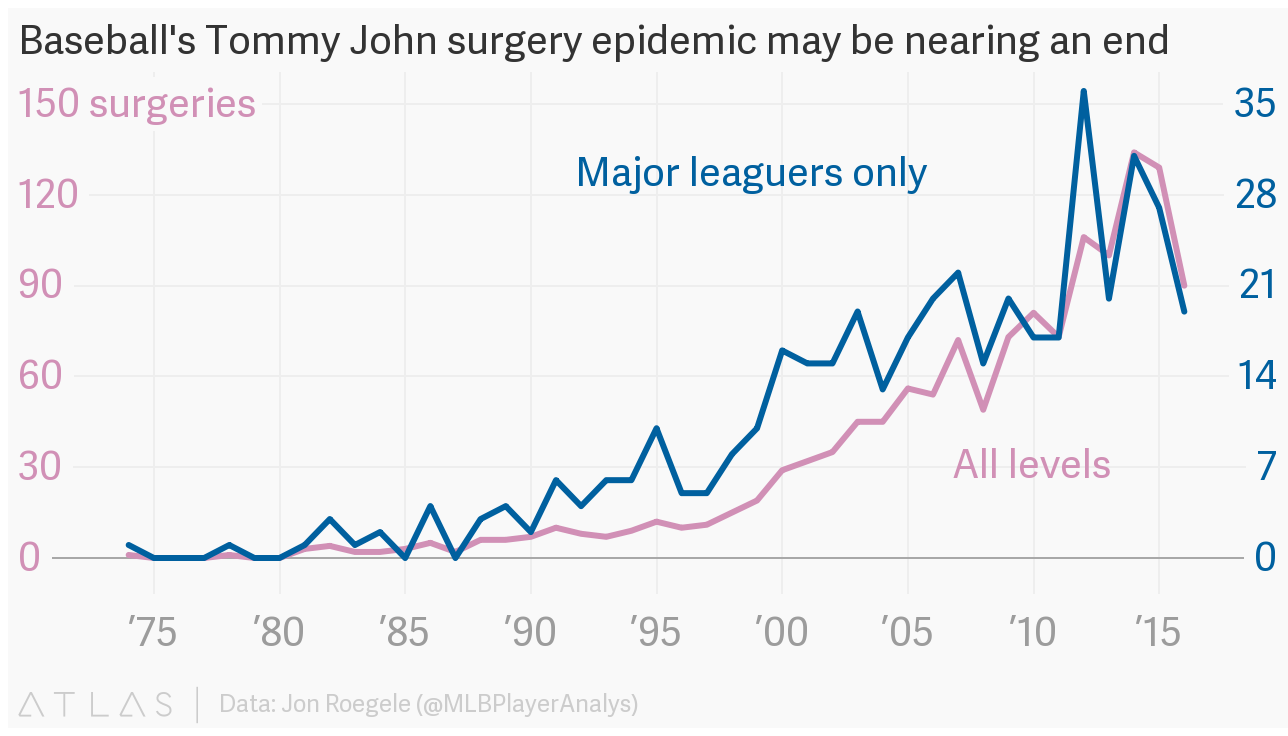 Then, the upward trajectory strangely stopped. In 2017, the number of TJ surgeries dropped to 90, compared to 127 from the year before.

And that 30% decline, data suggests, could be attributed to the rise of stem cell therapy.

Stem cells have an inimitable property that’s the key to their healing potential: their ability to differentiate, or become any other type of specialized cell in the body. Embryonic and adult stem cells are the most popular, especially the former, which is right in the nucleus of some of the most advanced medical science today.

Embryonic stem cells are employed in a wide range of applications, despite its surrounding controversy, from Alzheimer’s and autism, to vision impairment and infertility.

Adult stem cells, however, which are derived from bone marrow, fat, or blood, is more widely accepted by right-driven naysayers. They have less range than embryonic stem cells, primarily used to repair or replace damaged tissue.

And that makes them ideal for repairing muscles or tendon tears like a torn UCL.

Maybe the best example of a successful stem cell treatment for UCL weakness is none other than the living legend, Bartolo Colon. The Cy Young Award winner as the best pitcher in the game in 2005, Colon followed his career-year with four horrendous ones due to injury, leaving him unsigned by 2009.

He took a season off to recover, and returned in 2011 to resounding success. He kept his rehab program underground for as long as possible, until he finally revealed he had a team of Dominican doctors using stem cell therapies to treat his ligament damage and torn rotator cuff.

Since then, he’s been a two-time All Star, is the active major league leader in wins, and just signed a $12.5 million contract with the Atlanta Braves in the summer. He’s 44 years old, currently.

For the average person, TJ surgery isn’t game-breaking – you’d be ready to go back to work in a month to six weeks.

But for those that make their living throwing heat past the best hitters in the world, Tommy John surgery will keep them out for a year and a half, in order to build strength in that ‘money arm’. 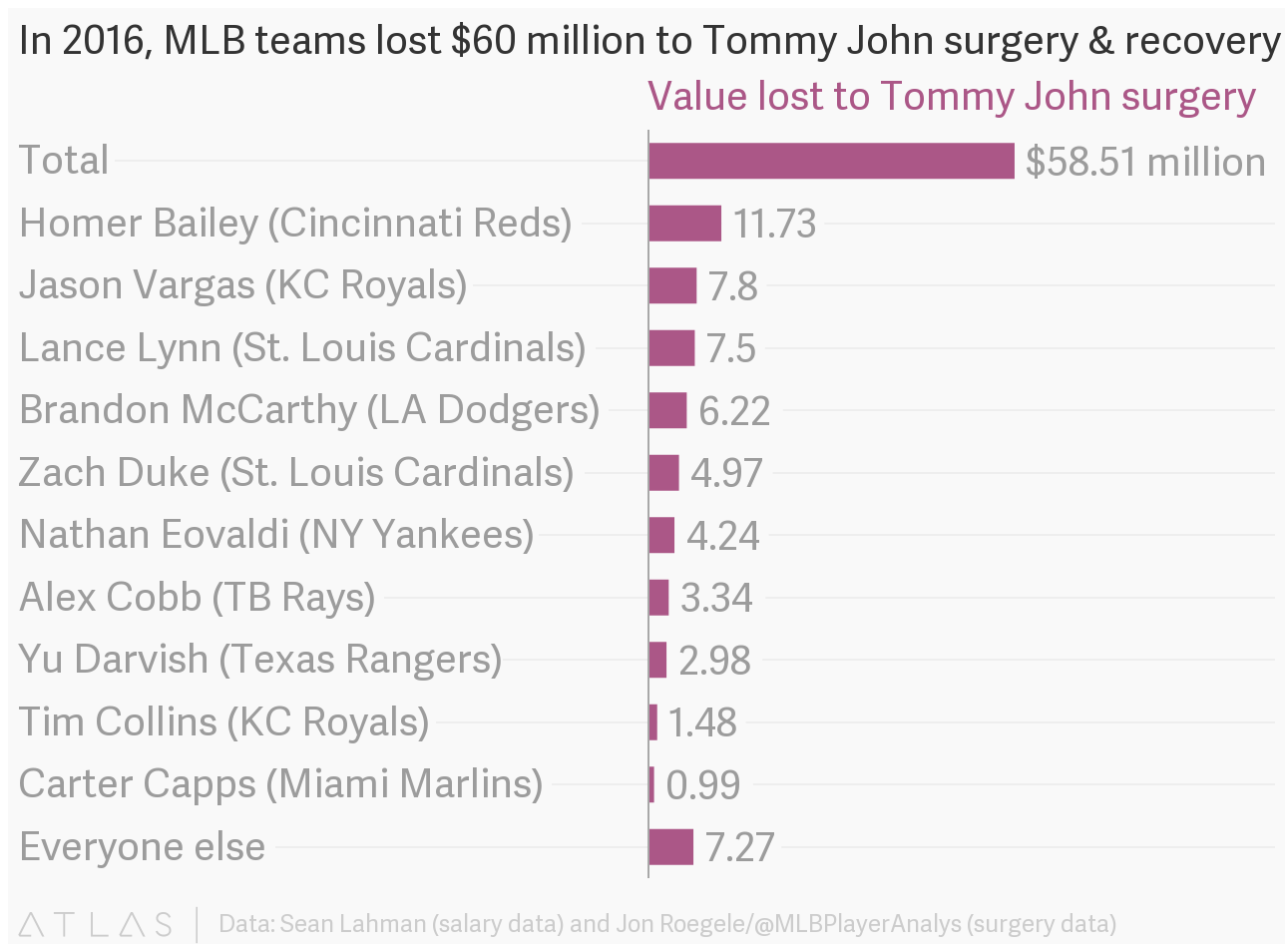 Last season alone, Major League Baseball organizations lost roughly $60 million in player value, having to cover the contracts of players rehabbing from TJ surgery. That’s almost enough to roster an entire pro team! And that $60 million doesn’t account for the losses suffered by players who had surgery in the final year of their contract, meaning MLB teams released ’em so they wouldn’t have to pay ’em.

Preventing Tommy John surgery was close to impossible. Pro pitchers throw too hard, and experiment with breaking pitches at far too young an age, to preserve their UCLs for their future. The only remedy that would work needed to be something that could cure ligament tears, but with a much faster recovery time.

Stem cell treatments today can likely get a 15 or 16-year-old pitcher through their first partial tear. If they need to get full TJ surgery by 24 regardless, avoiding that first one will go a long way towards the longevity of their careers.

Some stem cell doctors are even more optimistic, saying they’re confident stem cell treatments will be able to handle any severity of damage to the UCL – making Tommy John surgery obsolete.

The pitcher returned to the big leagues fully recovered in February 2013.

“You never say something replaces something else entirely,” Purita says. “Stem-cell therapy is not going to replace every case [of Tommy John], but it could probably replace the majority of cases.”

The lack of literature on the science of this alternative procedure is what’s keeping MLB teams away from having their players opt for stem cells.

But as the L.A. Angels have shown, things are changing.

“The needle is moving towards this being a valid way of treating things,” continued Purita. People are starting to recognize that “someone making [or risking] $20 million a year is not going to do something he hasn’t checked out well.”

If Garrett Richards can stay healthy this year, and the years proceeding, he may become the 21st-century Tommy John. And that’ll induce a trickle-down effect, where every team will have a stem cell therapist on staff, or one on speed dial at least.

Countless careers can be saved, as well as millions of dollars for MLB team owners.

So we’re counting on you, Garrett Richards. Not only to save the game’s talented young arms, but to give a bit of a boost to Mike Trout – the best player of this generation could use some support.

Stem cell treatments and regenerative medicines aren’t new or underground to us – we’ve been treating our patients with PRP therapy, and other injection therapies, for years.