WHY ARE VENTURE CAPITALISTS HEAVILY INVESTING IN THIS AREA OF REGENERATIVE MEDICINE?

Home/blog/WHY ARE VENTURE CAPITALISTS HEAVILY INVESTING IN THIS AREA OF REGENERATIVE MEDICINE?
Previous Next

WHY ARE VENTURE CAPITALISTS HEAVILY INVESTING IN THIS AREA OF REGENERATIVE MEDICINE?

The theory of eternal youth – or the concept of human physical immorality – is a prevalent theme in both mythology and fictional tales.

Unfortunately for us, those creative concepts have yet to translate to reality, always distanced well beyond the reaches of today’s scientific limitations.

And that’s not for a lack of trying. A considerable amount of research has been dedicated to solving the mystery of human life and genetics, with hopes of manipulating the aging process, giving us the ability to live forever.

Sounds utopic, doesn’t it? We hope we didn’t fill you with visions of everlasting, because we’re no where closer today than years past to that penultimate goal.

But, other advancements – particularly regenerative medicines – are seen as the next best solution, a possible path for fixing destroyed body parts, which in turn will greatly extend life expectancy.

While that will never equate to eternal life, engineering human cells, tissues, and organs that can repair themselves, may keep us living longer and healthier than humankind from eras past.

WHAT IS REGENERATIVE MEDICINE?

Despite the abundance of science and studies that back the effectiveness of regenerative medicines, it’s still considered a ‘speculative venture’ by capitalists who’re intrigued by this ‘novel frontier’.

Even with processes still in need of perfecting, and all the ethical questions that surround stem cells, investors are still interested in the field, especially in companies who work with and handle stem cells directly.

Goldman Sachs analysts speculate the regenerative medicine field is appealing largely from its ‘vast potential’, to eventually treat common or rare diseases in virtually any part of the body, from common tissues to complex organs.

As a result, the regenerative medicine industry is being drowned in dollars, people hoping to bank on its drool-worthy potential and we’re talking hundreds of millions of dollars annually.

In 2010, the industry took in roughly $200 million in venture capital. That rose significantly in 2016, where that total quadrupled. Stem cell technology was responsible for a substantial percentage of those investment dollars; between $700-800 million dedicated to regenerative medicine went to stem cell projects alone in 2016.

Analysts did note that while investment dollars rose, the numbers of deals didn’t rise in unison. Even with steadily rising investments, the number of deals remained between 30 to 40 from 2010-2016. That indicates larger investments per deal over time from interested venture capital firms: 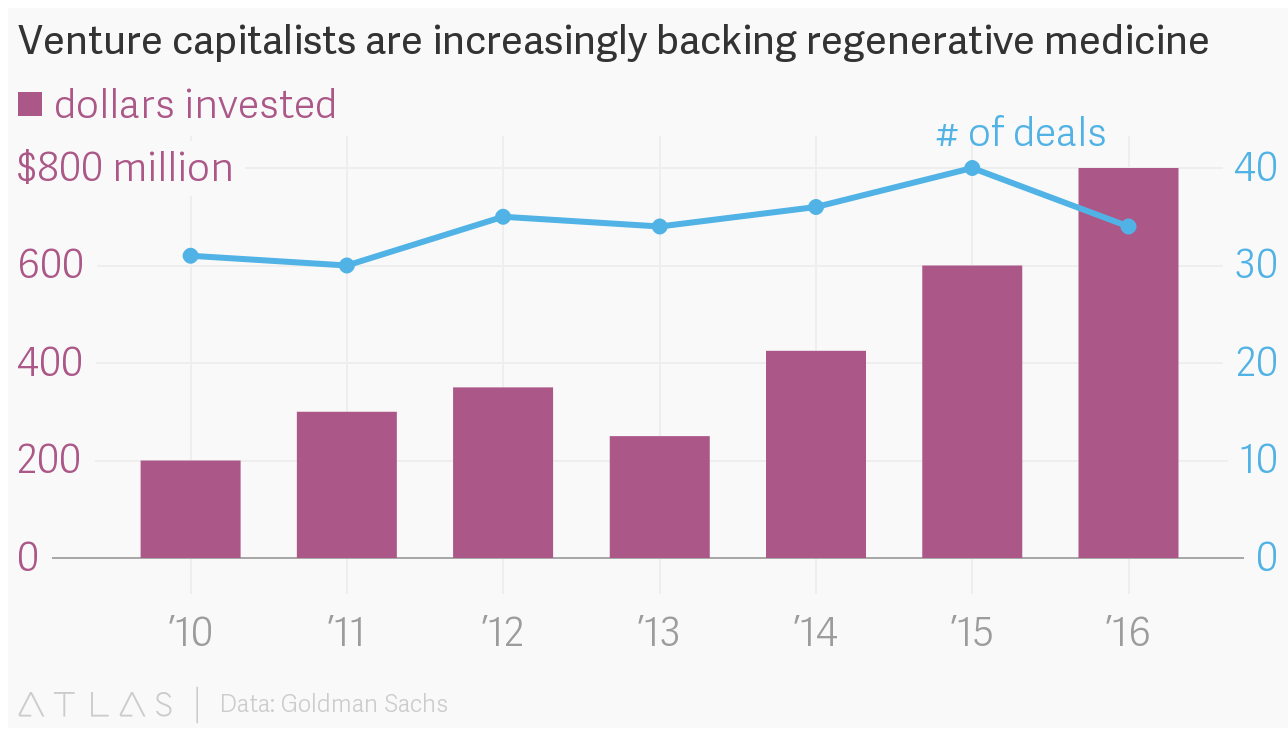 WHAT DOES IT ALL MEAN?

With more money & support being funneled into the field of regenerative medicine, the boundaries towards longer life are being pushed like never before.

Unity Biotechnology, for example, is currently devising a technique that eliminates senescent cells – expiring cells – which will theoretically increase human longevity and maintain youthfulness. The approach is already effective in mice.

Senescence can be seen as a biological ’emergency brake’, which cells rely on to limit division, or multiplying out of control. Removing that brake means the senescent cells remain present, and start to accumulate. As a result, inflammatory molecules are dispersed, which damages nearby cells and tissues, facilitating aging and the body breaking down.

So with Unity selectively removing those cells, it could be one new avenue to keep people young and healthy, for much longer than ever before.

Charles Murray, interim director at the University of Washington’s Institute for Stem Cell and Regenerative Medicine, wrote an April 9 editorial in the Seattle Times, saying, “This year, we also seek a first-time investment from our state legislature.”

While we patiently wait for OUR multi-million-dollar investment, the RegenerVate team is more than happy doing what we do best: helping you quickly recover from your chronic pain or injuries, via our tried-and-true regenerative medicines.